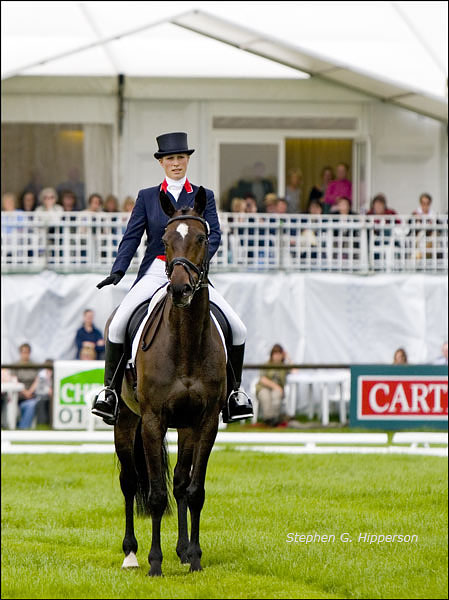 A few year back, to mix it up a bit, I visited Bramham Horse Trials which takes place quite close to where I live.  Let me hasten to add, I’m not a horsey person, so such things don’t really interest me. However, it seemed like a good ‘stretch’ for my photography.

I learnt quite a bit, not least pick the right day!  I went along on the dressage day so all the ‘action’ was people making their horses do the dancing round the ring bit – useful for compactness, but a real job to follow with a lens long enough to get a reasonable sized image of the horse and rider (and they move pretty quick).

I quickly learnt where the key positions were and, as above, the most obvious ‘pose’ was at the finish of each session when the rider ‘presented’ to the judges.  This woman was one of the last I photographed and I’d nailed down the positioning and timing pretty well.  Judging by the sudden influx of other photographers when she entered the ring I guessed she was a ‘known’ rider – it turns out she’s the granddaughter of QE II, daughter of Princess Anne.

Normally when I do my photography I’m on my own, with no other photographers or people about, but here I was standing with 3 or 4 other people with DSLRs.  What I hadn’t particularly appreciated was the volume of noise that emanates from multiple DSLR shutters going off together.  One poor lady spectator got particularly annoyed and voiced it, but from my point of view that was tough on her as I’d been standing there for a good 45 minutes before she arrived on the scene.