I’ve never given a lot of thought to how they paint the sides of buildings in narrow streets – I just presumed scaffold would be erected, but hanging precariously from a rope obviously works too! 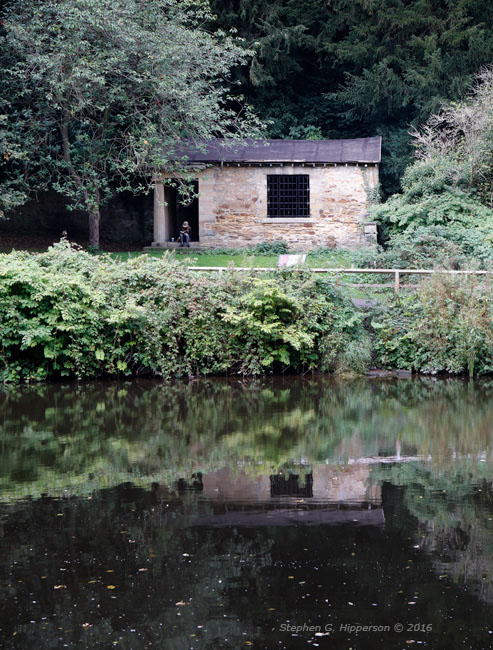 I crossed the river further down and walked back past this figure – he was quietly readilng  with a vacuum flask by his side – I got the impression he would be moving until he’d finished his book. 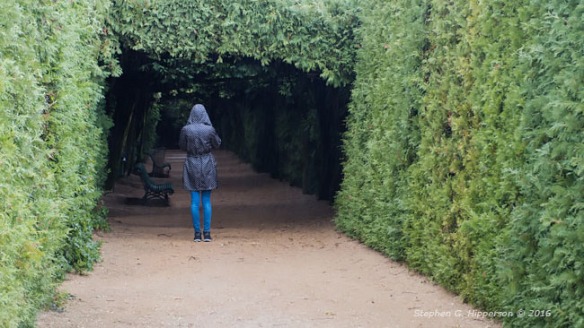 Chucking it down with rain yet my daughter saw a photo she just had to get ….  which meant I could get one she didn’t! 😉

It was a pretty grey foggy day today.  I had planned to do a circuit of a local reservoir but my companion preferred to stay dry, so a revision of venue took us to Holy Trinity church – Wensley, North Yorkshire.  It was pretty dark inside the church and not very warm either.

I don’t always take pictures of stained glass when I visit churches, but I picked out these windows, which I thought were a little unusual (?).

” Ah Galahad, Galahad for such as thou art is the Vision“.

The angel above Galahad carries a banner which reads “One crowded hour of glorious life is worth an age without a name.”   – I’m afraid, to me, it suggests celebrity rules.

“Ye seek Jesus of Nazareth which was crucified. He is risen. His not here.”  Which my research suggests is derived from Mark 16:6 of the King James Bible.

This window commemorates an organist at the church (1906).  I wasn’t sure that I was interpreting the window correctly but then I noticed the organ pipes in the background.

Saint Cecilia.  I may start a collection of ‘stained glass Saints’.

Original colour digital but a bit noisy so convert to black and white and go for the grain look seemed the thing to do.  I was quite pleased with the outcome for what was a reactive snap.

A few year back, to mix it up a bit, I visited Bramham Horse Trials which takes place quite close to where I live.  Let me hasten to add, I’m not a horsey person, so such things don’t really interest me. However, it seemed like a good ‘stretch’ for my photography.

I learnt quite a bit, not least pick the right day!  I went along on the dressage day so all the ‘action’ was people making their horses do the dancing round the ring bit – useful for compactness, but a real job to follow with a lens long enough to get a reasonable sized image of the horse and rider (and they move pretty quick).

I quickly learnt where the key positions were and, as above, the most obvious ‘pose’ was at the finish of each session when the rider ‘presented’ to the judges.  This woman was one of the last I photographed and I’d nailed down the positioning and timing pretty well.  Judging by the sudden influx of other photographers when she entered the ring I guessed she was a ‘known’ rider – it turns out she’s the granddaughter of QE II, daughter of Princess Anne.

Normally when I do my photography I’m on my own, with no other photographers or people about, but here I was standing with 3 or 4 other people with DSLRs.  What I hadn’t particularly appreciated was the volume of noise that emanates from multiple DSLR shutters going off together.  One poor lady spectator got particularly annoyed and voiced it, but from my point of view that was tough on her as I’d been standing there for a good 45 minutes before she arrived on the scene.

I was asked recently what ‘catchlight’ meant in portraits.  Trying to describe it seemed to be a bit cumbersome so I thought I’d add these two portraits to illustrate – without and with.

My model here, my daughter, has quite light irises so lack of a catchlight is not so bad.  However many subjects have really dark deep eyes and it helps to lift the eye from a black disk with just a spec of a light.

As matter of interest, these taken on medium format (120) black and white film, negative scan.  The original images were an exploration of portrait/fashion photography and this is a crop of full photograph – I suspect some will be able to guess from which image and photographer I took my inspiration.