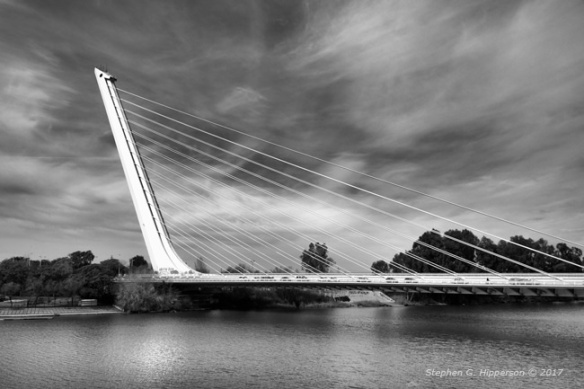 The Alamillo Bridge in Seville. 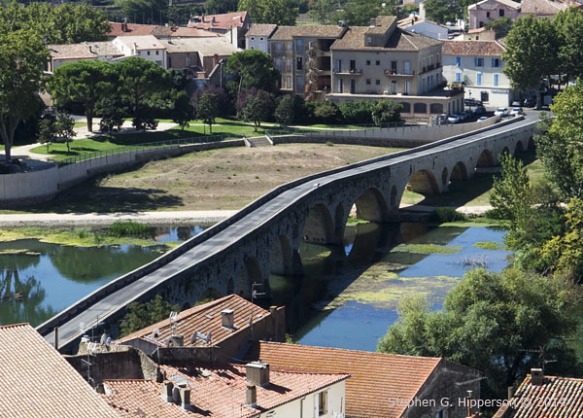 I suspect this picture has been taken by many 100s of tourists during their visit to the cathedral at Beziers, France. The bridge crosses the River Orb. It would have been nice to have some sun on the side of the bridge but judging from the orientation/time of day, I don’t think it would happen very often.  (Of course, if somebody wants to sponsor me, I’ll go back and check it out at various times of the year and day!) 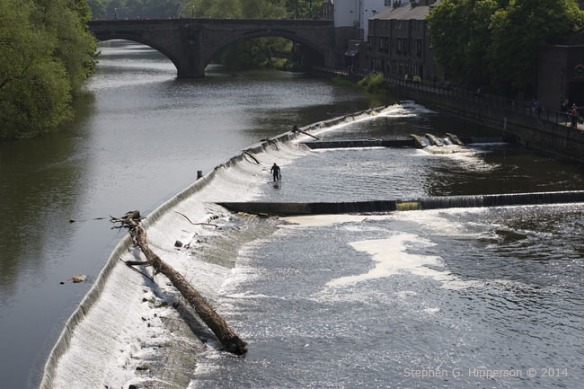 Not sure what this guy was up to in the River Wear at Durham. He had a full wet/dry suit on so was prepared for whatever it was.  I understand that Salmon and Sea Trout can be caught in the Wear and that catch data suggests last year was one of the best on record – water quality has improved over the years. 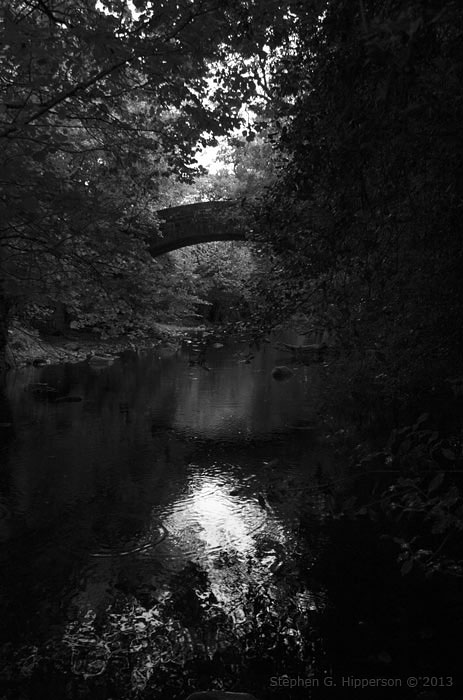 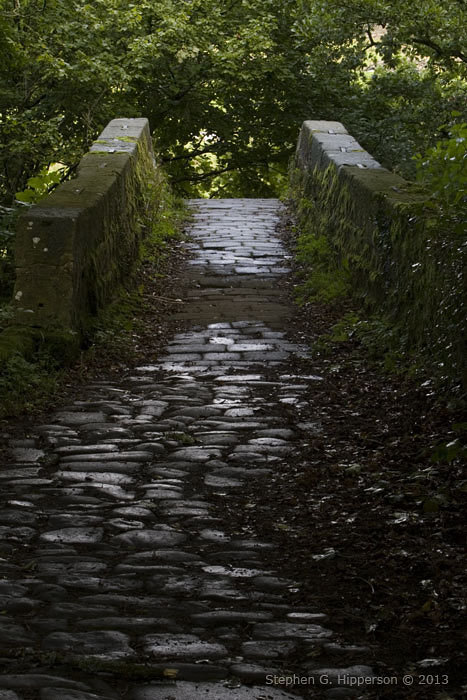 Another couple of views of Dob Bridge. 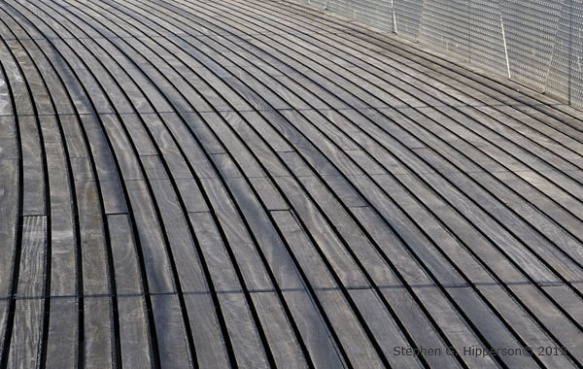 It occurred to me as I was posting this that I’ve not really moved far from taking pictures of trees in the landscape to wooden structures. 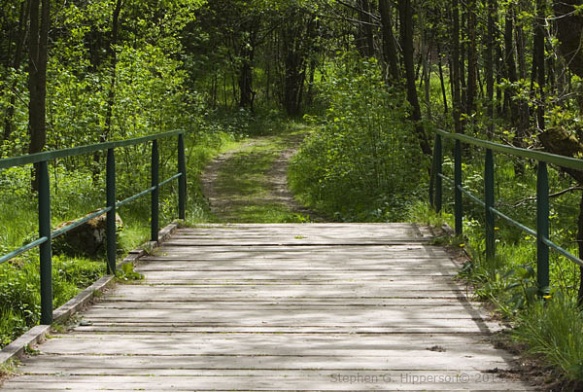 Although only a simple bridge across the River Washburn, it seemed like an entrance to an enchanted land. 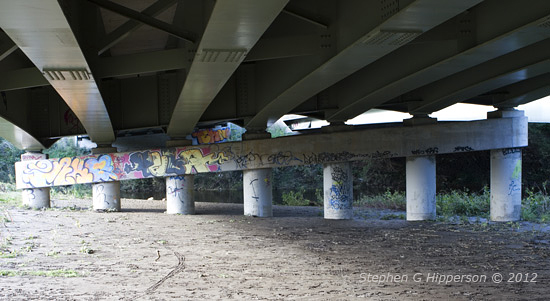 The river has gone down now, back to what I consider normal levels – so I dropped down this morning to satisfy my mind and to take a few pictures.

Taken square on to the pillar the first shot shows the banked road quite well – the concrete bar parallel to the bottom of the road.  Part of my initial misgivings was about the not horizontal bar, but I’m happier, now as I can see that makes sure there is similar rigidity at the top of each of the constituent pillars – if it was level the pillar on the right would have  greater flexibility, which wouldn’t be a good idea for the stability of the road surface. 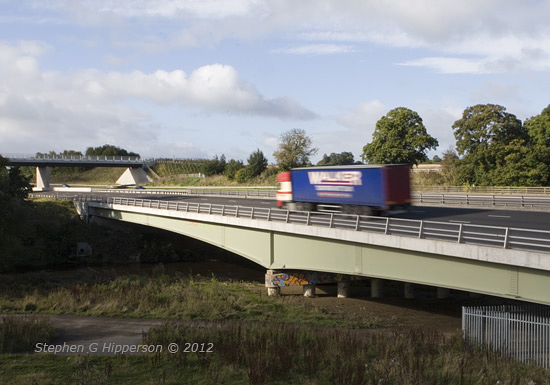 This a picture of the road above the pillar.  What isn’t particularly obvious is the gentle curve in the road at this point – unfortunately I couldn’t find a shooting position which would show this more clearly. 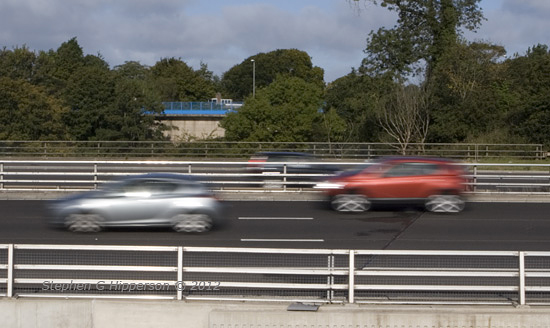 The two carriage ways are more or less the same height but because of the tilt (banking) of the road, the cars in the fast lane (next to the centre) of the near side carriageway are higher than the fast lane going in the opposite direction. 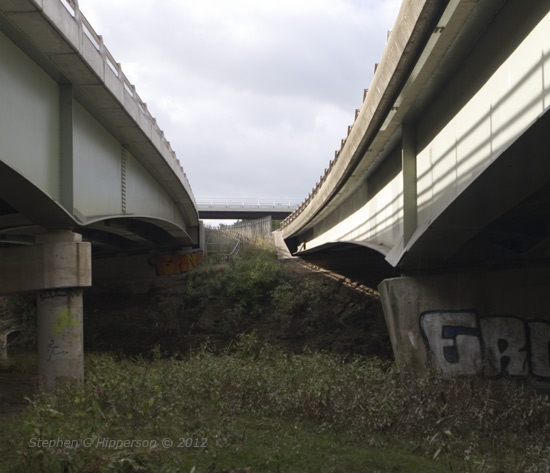 A view down the centre of the two carriage ways, showing the relative heights of the two fast lanes.   Another interesting point, shown in part here, is that the pillar construction of left hand carriageway is different to that of the right, which has a solid construction.   It may be that the two carriageways were built at different times.  I remember the road here used to be a dual carriage way (two lanes in each direction), but now it’s a motorway (three lanes in each direction).

Well, I’m bored with that now.  Time to move onto something else…..ish. 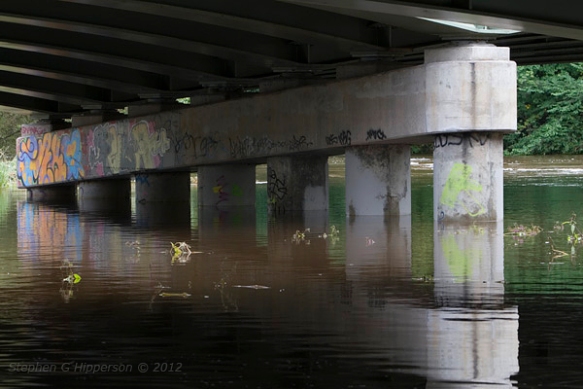 I wasn’t going to post this, but I became intrigued by what I can see in the picture – so much so that I will have to return and check out what is actually happening here.  Suffice to say, this is a support pillar to a road bridge for a 3 lane highway/motorway.   I suspect the individual girders supporting the bridge must be of different depths, with the deepest to the far end of this pillar.  My logic tells me the concrete horizontal ‘bar’ ought to be parallel with the surface of the water.

We’ve had a fair bit of rain over the last 36 hours and the river has overflowed again. 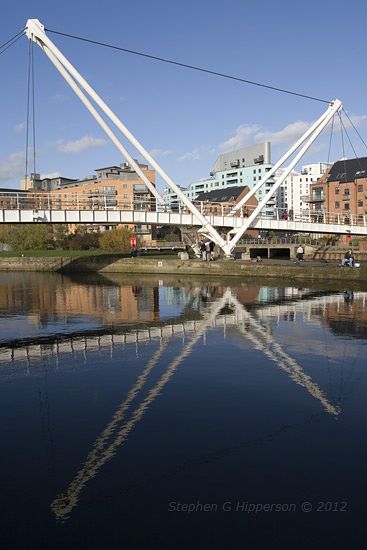