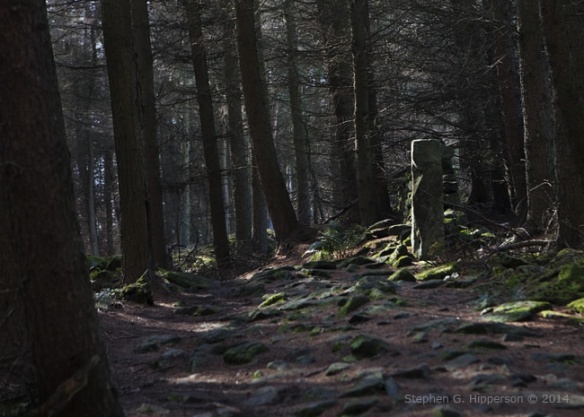 This old post has always fascinated me – it gives me the feeling that it might have had some ritual significance, but I doubt it’s ever been more than a simple gate post.. Every time I walk past it I make a photograph if I can.  On this occasion, whilst I had my tripod in the car, the camera connector plate was still at home – (screwed to the bottom of a long lens (doh!)) – so it was effectively useless. I used a tree trunk to help steady the camera.

One of the things I look out for on my trips into the countryside is the occasional stone post I find there.  Most of the time they are an integral part of the landscape, marking the gaps in stone walls and often supporting gates – though for the most part gates tend to be made of metal and are attached to the stone posts using the ubiquitous nylon rope we find everywhere nowadays. Every so often, I find a post in the middle of a field or in some other way unusual – these are the posts that draw my attention.

I found this post lying half buried in the side of a hillside recently – I might have missed it altogether if my eye had not been drawn to the letter ‘S’ carved into it.  Surely, a story behind this.