Located at Beamish – the ‘Living Museum of the North’. 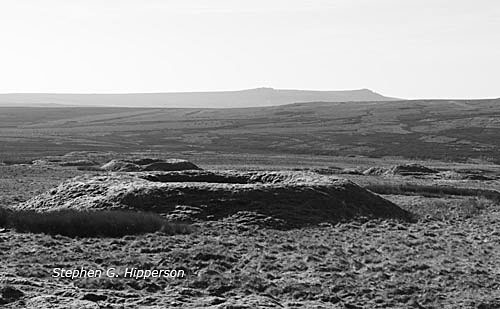 Some of the remains of Greenhow Hill, North Yorkshire lead mining area, which seems to have been in use from the 16th Century through to the 19th in some form or other.

I’d been up there (it’s moorland and pretty bleak) a couple of weeks before to take photos and it seemed to me that I needed more height to get a better perspective on the craters.  I had it in my mind that I might be able to make it look a bit like a lunar landscape, so I took my 7-tread aluminium steps I use for decorating along.  I have no doubt the farmer must have wondered what the heck I was doing, carrying a set of steps through his field but there you go.  Fortunately the ground was quite hard as it had been frosty that morning, while I wasn’t exactly stable at the top of the steps, it wasn’t so dangerous that I wouldn’t risk it.  (It’s quite a strange feeling being at the top of steps in the middle of a field with no ceiling or walls around).

Anyway, I still didn’t really get the height I wanted but this one is about the best I got.  Fortunately it was a very bright cloudless day, which gave just the right sort of hard, contrasty light to start to give an extra-terrestrial feel (well that’s my view anyway!).

I often second visit, sometimes more, places where an idea comes to me to photograph in a certain way, or a picture I’ve taken on a first visit prompts an alternative approach when I get home and view it on a larger screen.  I’d recommend the approach to anyone.  We often come up with ‘good ideas’ only to forget about them over passage of time, or allow other photographic priorities to take precedence.